BRITT FREDA has been drawing and painting for as long as she can remember. She received a double degree with honors in fine art and writing from St. Lawrence University in New York. In addition, Freda studied painting, drawing and photography at Lorenzo de' Medici Institute of Art in Florence, Italy and by invitation for intensive residency study at La Cipressaia in Montagnana, Italy under internationally acclaimed South African artists Rose Shakinovsky and Claire Gavronsky.

Since 2011 Britt has focused the majority of her painting on endangered species. Her work was included in the 2013-2015 Environmental Impact U.S. museum tour and is part of the National Museum of Wildlife Art’s permanent collection as well as the National Museum of Wildlife art in Jackson Hole, WY. Britt’s work is exhibited prominently in RARE Gallery and across the country. From a small farm on an island in the Pacific Northwest, with her family by her side, Britt searches the horizon looking toward future generations. Her paintings are impactful and she is active in creating an environmental dialog to protect, conserve and live peacefully with the nature she paints.

ARTIST STATEMENT: My paintings have been influenced by a lifelong fascination, awe and reverence for the natural world. Michele Corriel, Art & Architecture, 2014 wrote "[Britt Freda’s paintings] ask us to travel not only the roads we see but the ones we’ve lost along the way.” While my subjects are rooted in realism, the closer the viewer gets one will discover my surfaces are regularly imbedded with etched words, statistics, poems, maps or seedpods. The elements that are layered between patterns of color are usually circuitously referential of environmental elements (seed pods, petals, cellular structures...).

From afar we are practiced at not questioning what we see, but up close where wrinkles and freckles and the flecks of color in a person's iris are visible, so much more is revealed. I want the same to be true with my paintings. There is something intimate about getting closer, to a painting or to a person. In close proximity the subjects of my paintings begin to dis-solve (also read: to un-explain) becoming blocks of color and marred patterns which I hope nudges the mind to dissolve preconceived notions and to remember “roads” we may have forgotten.

When I feel they are successful, my paintings are about the play of puzzles and discovery, about learning and re-membering (also read: coming together). In that space where breath can be heard or felt there is more to see, to hear, to be touched by, to comprehend. It is there that the world becomes more complex and layered and interesting and riddled with stories that unite us as living beings. And the more pieces there are to play with! Beauty is found in so many unexpected places, even in those wrinkled, scratched, worn chunks of color. Up close the familiar beigns to look foreign and the foreign, familiar.

Past paintings of bees, owls, the notion of home, our collective future--but mostly looking into the eyes of my children--led me to my current series on endangered species. While the subject matter isn’t always easy I hope that you are, in one hand, seduced by sumptousness while simultaneously holding in the other hand the knowledge that we are indivisible from our natural environment, and ultimately, from each other.

"Patagonia and the Creative Action Network aim to create a new activist collection of political protest posters to communicate Patagonia’s belief that our country’s economy, security and future are wholly dependent on a healthy environment and urging all of us to take action and vote to protect our planet. Born out of The Canary Project, CAN, and Patagonia’s Vote The Environment campaign of 2014, #voteourplanet is inviting artists & designers across the country to use their talents for our planet." - Creative Action Network

"I am thrilled to have three images included in this exciting campaign. See them at the Creative Action Network and spread the #voteourplanet word."

"Whether for endangered species, alternative energy, land and water conservation or sustainable food production—through creative, collaborative coalitions we can make a difference. But in order to create change we must get involved. Show up like an elephant: be intelligent, compassionate and fierce, trumpet your voice so the whole of the world can hear! Vote our planet.” –Britt 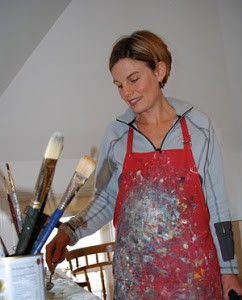