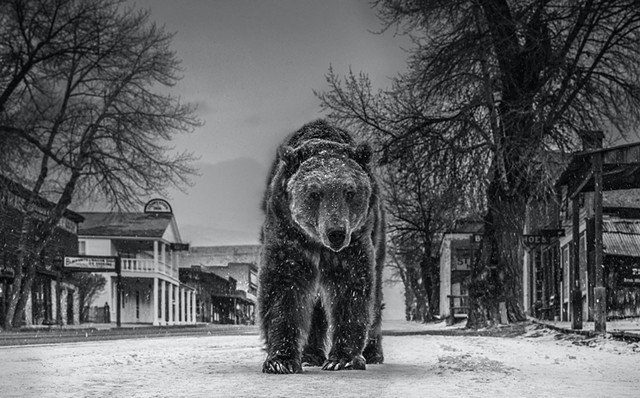 Virginia City, high in the hills of Montana, is as good as a ghost town. In the winter, only about 60 people live in the community. It is a State Heritage site and many of the buildings from the boom years of gold mining remain intact. In the 1860s, during the first three seasons, an estimated $30 million worth of gold was removed, by 1863 over 15,000 people lived there. Over the last five years, I have photographed many times in the town and the neighbouring Nevada City, which is truly abandoned. It gets easier every time, as I know almost all of the remaining winter inhabitants and most are keen to collaborate in my storytelling. A strong partnership has developed between the locals and my team. Winter is always my preferred time to work in Montana. It is visceral and visually energising to complement final frontier canvases with snow. Furthermore, the tourist traffic in the depth of winter is minimal, whereas these destinations are overrun with visitors in the summer. There is no point filming up here in July and August. On our most recent visit the forecast was for snow and it gave me an idea. I have worked in the past with an old bear called Adam who lives in a sanctuary nearby and is something of a local celebratory with the mountain men. His owner occasionally exercises him in the area and I enquired if the high street of Virginia City would suffice for Adam’s morning workout. A plan was hatched and we then had to wait for the snow to fall. We had done our homework as to the preferred frame of the street, it was then just a case of working with Adam to get the shot. It was cold, but he seemed to enjoy his trip to town.